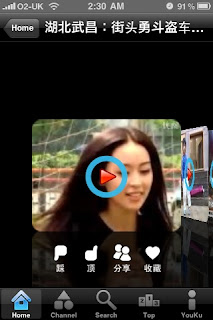 My quest to share video with people in China led me to this. Youku is
the most popular video site in China, #20 most popular site in the
world according to the ranking from google. Youku support tons of
phones, including iPhone (and PC of course). Unlike YouTube, most
videos from Youku can be downloaded. There's also a PC application
from Youku called iku. iku does encoding, uploading and downloading on
PC, support export to iPhone and PSP. Here's a screenshot of the flip-
album view of the Youku App, a free app from App Store called "Youku".
Posted by Bill Hung at Wednesday, June 16, 2010