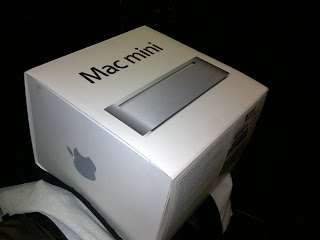 Just got my mac mini, Billmac back from Apple repair. The Apple Genius bar appointment at Regent St made me waited 40 min, even I had an appointment. They told me the repair would take 4 weeks, but it's back in 2 days. I was using Billmac for video editing and music composing. Will use Billmac as a router for t-mobile mobile broadband and also use it as an autobuild server.

Update: Billmac is back to Apple Repair straight away.
All I did was installing the t-mobile mobile broadband software from the official disc. It was booting and all before install, and simply installing one official software can cause it not to boot. Orz.

Update: Billmac was fixed very quickly
So I sent Billmac back to Apple Repair on 2010-12-08, and I just got a phone call today 2010-12-15 from an Apple Engineer. He found out, correctly, that the problem was caused by the t-mobile software. He also found out it's the official t-mobile software disk replacing the crucial libcurl file named libcurl4 (library file for URL related work, used everywhere) of the OS X 10.6 was replaced by the official t-mobile CD. He managed to revert this and make Billmac works again.
He also told me I can pick up Billmac from Regent Street, London today. Wow, one week repair was impressive, especially it's right before Christmas.
Still, a network library caused a mac not to boot is just bad.
One "Like" for Apple today. =]